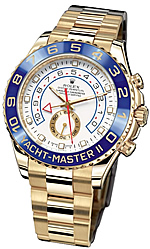 At BaselWorld 2007, Rolex announced a new sports watch for yachtsmen: the Rolex Yacht-Master II. When Rolex releases a sequel to an existing model, you can always expect to see impressive new functionality. Rolex made significant changes to the GMT Master movement between the original GMT Master, and the GMT Master II, the latter allowing the hour hand and the 24-hour hand to be set independently. Likewise, the Explorer II changed dramatically from the original Explorer, adopting the same movement as the GMT Master II which added a 24-hour hand and date. And now the Yacht-Master II represents another extremely important step in Rolex evolution.

I’m not a boater myself, but in my opinion, the original Yacht-Master doesn’t really do much more for yachtsmen than a standard dive watch can do. The bi-directional rotating bezel can be used to track the start sequence of a regatta (fancy word for boat race), and the Triplock crown keeps the case impervious to sea spray, but that’s about it. Nothing else except the name, and possibly the watch’s exorbitant price, really has much to do with yacht racing.

Not so, with the Yacht-Master II. The new version has an extremely complex and innovative new movement with a countdown timer which can be programmed to start between one and ten minutes in order to accommodate regattas with varying start sequences. I use the term “program” rather than simply “set” because the value is actually remembered, and when the countdown timer is reset, the countdown hand will return to the last programmed value. For a mechanical watch, this is an extremely impressive feat. There is a tradeoff, however: the date which was present in the initial Yacht-Master had to go to make room on the dial, and no doubt to allow for the additional complication of the movement.

I found the reaction from the hardcore Rolex fans out there to be mixed. I think most of them were so accustomed to looking at more or less the same Rolex styles for so many years that the new Yacht-Master II really caught them off-guard. The two biggest complaints I heard focused on the surprisingly prominent “YACHT-MASTER II” branding on the bezel (for better or for worse, the new generation of Rolex watches are much more heavily branded), and the fact that you have to unscrew the crown in order to set the countdown timer, leaving the watch more vulnerable to moisture, of which there tends to be plenty around yachts.

Whether you like the new Yacht-Master II or not, there is no denying that it represents a major new innovation in the world of watchmaking. In many ways, Rolex is the Apple (as in computers) of the Swiss watch world. They are arrogant and secretive, they end up setting most of the trends, and they command an extremely loyal following who sometimes complains, but in the end, always comes around.

Should You Buy a Watch at Auction?
Dot Braille is the New Smartwatch for the Visually Impaired