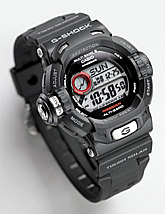 Casio seems to be gradually bringing the G-Shock and Pathfinder lines closer together. The first Casio Riseman was introduced back in 1997, but has been discontinued for some time. About three years ago, Casio introduced the G-Shock GW-400J which borrows from the Pathfinder line by integrating a thermometer. More recently, Casio announced the Ultimate Pathfinder (PAW1500) which, like the G-Shock line, is now water resistant to 200 meters (650 feet) rather than the previous 100 meters. And now Casio is reviving the Riseman line with the very strong Casio Riseman GW-9200.

All that is keeping the new Riseman from being a true triple sensor Pathfinder is the digital compass which, unfortunately, is one of my favorite features of the Pathfinder line. However, the GW-9200 is clearly one of the most sophisticated digital watches on the planet. It looks fantastic, and has some additional small improvements like the ability to view the date and day of week simultaneously. I just hope that, unlike the GW-400J, we will be able to toggle between metric and imperial units for things like temperature and barometric pressure, however I’m guessing not, and I’m guessing it will not be released in the US (though I will be very happy to be proven wrong).