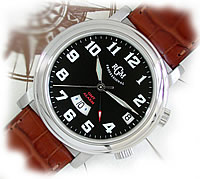 We don’t usually talk about high-end dress watches, and even more
rarely about custom-made mechanical pieces, so this article is a bit of an
experiment for us. But RGM — both the company and the watches — is too unique not have some mention on Watch Report.

As amazing as it might sound, America used to be the preeminent
watch maker in the world in the pre World War II timeframe. Brands
like Hamilton, Elgin, Gruen, Benrus, and Illinois led the way in
automated production and railroad-grade watches, producing high-quality timepieces at a broad range of prices. Their decline can mainly be attributed to the quartz
revolution of the 1960s.

I’m explaining a bit of history to give you some idea of how unusual
RGM is. Roland G
Murphy, based in Lancaster PA, makes and sells high-end and custom
mechanical watches for prices that are a lot less than the Swiss
marques. Moreover, many of his creations are available with vintage
American movements such as the Hamilton 921, making for a beautiful
watch that is truly American made.

His company is called RGM (his initials), and is known for
impeccable hand craftsmanship and the use of unusual techniques like
rose-engine guilloché (an interwoven, ornamental pattern). As a small company, you can actually talk to
Roland himself, which is not exactly an option with most watch companies.
RGM also specializes in one-off custom pieces, so you can call up and
get exactly the watch you’ve always wanted. That’s not to say it’ll be cheap, of
course. From the RGM history page:

An RGM watch can be had starting at about $1,750, although the
majority of the collection ranges from $4,500 to $26,000. Major watch
complications, like its Minute Repeater Perpetual Calendar or
Tourbillon, are the crown jewels of the collection exceeding $80,000
to over $100,000. Even still, RGM is considered a bargain. The
quality of the $1,700 RGM watch matches that of many other brands’
watches costing many times as much.

RGM watches are crafted in extremely small series of 18k yellow or
rose gold, platinum, and stainless steel. They feature hand-finished
cases and such elements as engine-turned (guilloché) dials and blued-steel hands. In every case, they are of the highest quality in their
price range. Most components are Swiss made although some models
feature American and Swiss made components. Every limited-edition
watch is individually numbered and signed.

Their low-priced watches use Swiss movements from ETA, Valjoux, and A
Schild. I was particularly entranced by the GMT Alarm (pictured here).

Even their basic watches use high-grade movements that are finely
decorated. ETA, for example, comes in 5 grades of movement, from
undecorated to COSC chronometer, and RGM uses the best. Gorgeous stuff.

Not a lot of people understand, want, or need such watches, but if you
do, an RGM is both a classic and a classy choice. As unique as you want,
complete with historic American movements, RGM is a fascinating
anomaly in the world of mass-produced European and Asian brands. I
don’t own one, but someday I hope to change that.