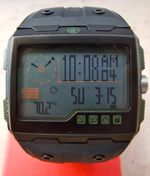 Up for review today is the Timex WS4, their new entry into the field of ‘ABC’ watches, which stands for Altimeter/Barometer/Compass. Actually, this one also has temperature, but that’s getting ahead a bit. Here are some quick stats:

Read on for the full review.

Sometimes, the backstory behind a watch design is fascinating. In this case, I had the opportunity to talk on the phone with the VP from Timex, who shared some interesting tidbits:

As you can see from the pictures, the screen is separated into three areas: In the upper left, circular-array segments are used to emulate an analog face, which is very easy to read at a glance. (Only hour and minute hands are displayed.) In compass mode, it’s used to display the emulated compass needle and direction. In the upper right, there’s a bitmapped area used to display text (Such as “Compass,” “Chrono” and such) as well as graphs from the altimeter/barometer. Below that, in the lower right, are segments used to display numbers: Time, lap times, splits, etc. (Actually, the lower left really is a fourth display area, and has glyphs for the weather forecast.)

That’s a lot to display on a watch face, and you can start to see why they went widescreen. Widescreen (from which the WS4 name is derived) gives more area to display information simultaneously, and I like the results.

On the lower-right bezel, there are four glyphs, showing which mode the watch is in and also if the alarm is active. 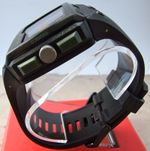 The buttons are knurled and sized for gloves; the center Indiglo button is easy to press as well. Note that there’s also a night mode, where any button press lights up the Inidiglo; convenient but hard on the battery.

The integrated band has decorative hex head bolts, which may or may not fasten it to the case. In addition to the rubber here, there’s also a nylon version available. On the black/green version, the buckle is matte-black steel, very nice. It’s thin enough to be comfortable for extended wearing, too.

Here’s a comparison shot with an analog-digital Timex I bought and have been meaning to review – you can see that it’s dwarfed by the WS4, but not as much as you might think. It also shows the comfortable curvature of the strap.

As with other ABC watches, the temperature gauge is no good while worn; your wrist is too distracting. Given the size of the WS4 and it’s extreme temperature rating (-10 to 50C), you could easily wear it over your coat, though, and get accurate readings.

Here’s another angle of the two Timexes, showing their comparable thickness. The WS4 appears to be much larger than it is; the blocky case and superwide strap give a wrist presence much more imposing than reality. 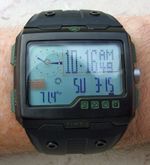 Here are a series of wrist shots. I’ve got approximately 7.25″ wrists, by way of comparison. The WS4 sits very comfortably, and though you’ll not miss it’s presence it is quite comfortable to wear. I wore the WS4 mountain biking around town, and the WS4 performed well: Even while bouncing along (cheap bike with rigid frame), the analog hour display was readable, and the big digits on the bitmapped area were readable too. The graphical display of altitude was nice, though I only used that to review the ride once I was done.

I should mention another feature that I really like on this watch, the alarm. Long ago relegated to checkbox status, innovation in this area has languished. Not so on the WS4: By using the bitmapped display for prompts, you can easily select that it ring on weekdays, weekends, a specific day only, with five-minute backup alert. I used it to wake up on weekdays, and rather enjoyed not having it go off Saturday morning. It seems like a small thing, but I appreciate the versatility it provides.

I was hoping to wear the WS4 hiking in the Anza Borrego State Park, but ended up moving house instead, so the outdoor portion of this review will have to wait. The compass should be quite useful there.

The altimeter is considerably more capable than I’ve yet put to use: You can set all sorts of alerts and alarms for max/min altitude, time above or below a set height, set four reference points, track time in or above a given altitude, graphically display ascent/descent and more.

The weather forecasting on the WS4 uses barometric pressure to predict the short-term trends, and is thus only slightly more useful than visual observation. It’s most helpful for rapidly dropping pressure signaling a storm, which for the backcountry is reason enough to exist.

There’s only two things I can suggest for improvement on the WS4: Solar power and better waterproofing. The Suunto Core is rated to 100m, and doubles as a depth gauge, so it’s possible to do. I asked the VP, and his reply was that the extra depth rating increased the costs beyond their price target; entirely reasonable. Solar is just nice to have, especially for a watch intended for expeditions.

List price is $199, and should be available in all Timex outlets. Our thanks to Timex for their loan of the watch and time to brief us on the design and background.

Review of the Timex iControl
The Timex Military Classic Review