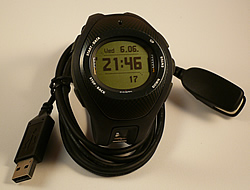 If you like your watches with long feature lists, have we got a watch for you! The Suunto X9i is a wrist-top computer, adding GPS to the usual laundry list of modern digital watch features. There’s no question that the Suunto X9i is designed for the great outdoors.

Let’s get right down to features. The X9i packs in:

At 52mm by 16mm, all this is packed into a watch only slightly larger than the average Suunto. With integrated band and plastic case, the watch is lightweight and comfortable to wear. It’s noticeably smaller than some of its competition, and the addition of GPS has been done tactfully — if you didn’t recognize the watch, you wouldn’t know it was a GPS.

Suunto describes the X9i as a “wrist top computer”, and they’re not kidding. Plan on spending some quality time with the manual before hitting the trails.

The GPS portion of the X9i is definitely the marquee feature, so let’s dive into that first. Modes and features include:

Each time you use the GPS, you can have it log data into internal memory for later downloading. This is then displayed in either the Suunto Trek Manager software, or on Google Earth.

The GPS, interestingly, cannot display raw latitude and longitude. For all its other features and capabilities, for some reason, no raw coordinates. Strange. Update (9/28/07): We’ve just been informed by Suunto that the X9i can display raw latitude and longitude information. If you go to the Function menu (long press on the middle right-hand enter button), you can select “Position” which enables viewing coordinates. Since this is a less frequently used feature, it is not the default, and is somewhat hidden. Our apologies to Suunto for the misinformation.

The included PC-based Trek Manager (sorry, Mac users — no Mac software exists or is planned) is, unfortunately, disappointing. Out of the box, traces from the watch simply display as red lines on a blank background. No maps are included, and you have to pay $99 each for the compatible National Geographic map sets — a bit of ruse, in my opinion. This is somewhat mitigated, however, by the free download that lets you export traces to Google Earth. There are some gotchas here, too, though — you can only download from the watch to Google Earth, not via the Suunto software. Minor but annoying.

I’ve included screenshots (below) from a couple of traces thus downloaded into Google Earth. The smooth trace along highway I-5 was taken with myself as a passenger, holding the X9i flat and above the window line of the car in 1-second mode. Works fabulously.

The second trace was from a friend who volunteered. He has a daily walk route, and we strapped the Suunto onto him like tagging a deer. As you can see, while walking, the X9i fared much worse, with large amounts of error and a fix that jumped around quite a lot. I would guess that the motion of the wrist makes it much harder for the watch to get and maintain a fix. Of course, the watch is primarily made for hiking, so this could be a problem.

The battery is one of the limiting factors of the Suunto X9i, so let’s dive into that. The watch allows you to set GPS sampling rates of:

For these rates, the battery lifetimes are, respectively:

That’s not bad, but it does circumscribe how you can use the watch. For example, don’t plan on a super-detailed trace of your two-week hiking trip unless you have a solar USB charger along. Depending on how you want to use it, battery life may or may not be an issue, but its definitely something to consider. The watch recharges when you plug it into a USB port or charger.

The barometer and altimeter have a chart mode as well where you can see a time history of readings. Very useful for hiking profiles, keeping an eye on the weather trends, and no doubt impressing your friends.

As noted above, the GPS performs best when the watch has a good view of the sky. That combined with the battery life leads me to recommend this for activities like biking, sailing (and boating in general), general aviation and use as a backup navigation instrument.

Other watch features (stopwatch, dual-time, alarms, time zones) all work great and are as expected.

Although I like the Suunto X9i, there are some drawbacks and annoyances. First off, the 100m water resist rating only applies if the buttons are not pressed. In other words, you can’t actually use the watch in the water at all. This is a glaring annoyance in an otherwise well-engineered watch, and we hope Suunto fixes the issue in the next model. Secondly, the interface is sluggish, and combined with hard-to-press buttons, makes for a sometimes-frustrating user experience. It’s hard to navigate when you can’t tell if the button was pressed or not. Thirdly, the GPS receiver sensitivity is considerably worse than even older handheld units, and fails to work in places where a handheld has no problem.

On the other hand, it works great with clearly sky visible, has a very readable and usable display, and can do amazing tricks like “display a backlit digital compass in the dark” that are super useful for outdoors types and geeks alike. If your specific needs happen to match up with the X9i’s specific strengths, go for it.

The Suunto X9i lounging about.

Without obstructions, the Suunto X9i gets a good, clean signal, even at driving speeds.

You mean I have to purchase the maps separately? Hmm.

Without a constant clear line of sight, the signal tends to be erratic.

The Suunto X9i next to my Citizen Promaster.

The data cable doubles as the charger.

The Suunto X9i on my wrist.

A close-up of the Suunto X9i on my wrist.

Notice the vents in the strap to let air reach your arm underneath.