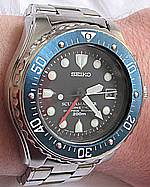 It took a long time to add the Seiko Scubamaster “Stingray” to my collection of divers. I don’t remember where I first came across this watch, but since the moment I saw it, I was smitten. After over a month of frantic and persistent searching, I finally came across someone who was willing to part with the exact watch I was looking for. That was about a year ago, and despite all the other watches I’ve gotten since, it continues to see more than its fair share of wrist time.

The Seiko Kinetic Scubamaster is not the most expensive watch I own, but it is probably the rarest and most unique. In fact, I think it comes pretty close to being the ultimate diver watch. It is feature rich, extremely tough, very accurate, and has a bold, distinguished look. Here’s a feature-by-feature breakdown:

The Seiko Scubamaster Kinetic Stingray is no longer available, and hasn’t been for some time. And when it was available, it was only available in Japan. No wonder it was so difficult to find. Mine was originally purchased on October 10, 1999, somewhere in Japan, as indicated by the warranty card, though I can’t tell where. I have all the original paperwork, booklets, packaging, and bracelet links. Although the watch has clearly seen quite a bit of service, it’s still in relatively good cosmetic condition, and in terms of style, is still one of the best looking divers I know of.