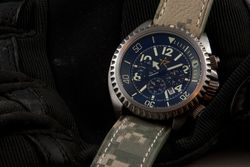 In the past few years, there has been a noticeable trend for watches to be ultra-rugged, apparently designed for tougher, more demanding people. Watches have always been made to certain rigorous standars — thus Sir Edmund Hillary was able to wear a Rolex explorer to the top of Mount Everest. Today we look at a different breed of tough watches from a company whose leadership is firmly rooted at “the edge”.

Rogue Warrior Watches is the wrist-borne brain child of one Richard Marckino who has an extensive history in the American military and special ops. Marcinko is the “Rogue Warrior” and has extended this brand into video games, books, knives, and now his own watch company. Rogue Warrior Watches make three models available with your choice of finish and strap. Today, we will be taking a look at their quartz chronograph: the Avenger Silver. 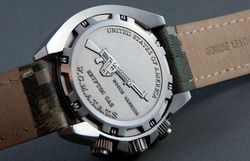 The Avenger is powered by a Japanese Quartz movement which handles timekeeping and chronograph duties. While the Avenger is not labelled with any water resistance, all Rogue Warrior watches that feature double gaskets on the crowns and pushers have been tested to 20ATM (660ft or 200m).

The Avenger is a large but very legible chronograph. It sits well on the wrist and the matte black dial is stealthy enough to keep this large watch from feeling flashy. Being a quartz movement, timekeeping is accurate. The chronograph is standard fare: the pushers unscrew to allow for stop and split on the top pusher, and reset on the lower pusher. In the couple of weeks I wore the watch, the chronograph worked without issue and the dial tones and layout make for easy reading.

The level of finish on the crown and pushers is good. The buttons click when pressed and the screw-down sleeve fits flush against the top of the pusher when unscrewed. While this seems incidental, finish and attention to detail can easily set a watch ahead of its competition.

The hands on the Avenger are excellent; the hour hand is a shorter style with an arrow head tip which makes telling time at a glace much easier. The case is wide, almost cushion style with large pronounced lugs. It sits comfortably and while it is heavy it also feels very solid, almost like a single piece. The bezel is internal in a reflector style and shows a traditional diver countdown timer.

The watch came fitted to a digital camo style leather strap and included a tactical wrist cover for the watch. The tac-cover is included in case you are running a black-op and the reflection from the crystal could blow your cover (literally).

The case is filled with Krypton gas to minimize the effects of rapid temperature change during anything from swimming in hot climates to parachuting into humid ones. Rogue Warrior claims the gas should prevent condensation from forming inside the case which can lead to rust in the movement and a cloudy crystal.

The watch uses a luminous system called Kryptolite which seems to act much like high quality Superluminova, and Rogue Warrior claims it will not degrade over time. Unfortunately, I do not have years for the review in order to verify this, although I can say that it is very bright and visually equal to Superluminova; it also seems to charge faster, but not last quite as long. As is always the case in the world of watches, it’s a tradeoff.

The main calling card for the avenger is its tough demeanor, but does it live up? After receiving the watch I promptly moved it from the included strap as I’m not much for camo. I fitted a nice aged leather strap with some spring bars I had floating around in a parts bin. Later that week, one of those cheap springbars snapped and the watch was flung from my wrist face down onto a tile floor. I expected the watch to be destroyed as it was literally whipped from my wrist while I was swinging my arm. Surprisingly, the only problem was a small piece of luminous paint had dislodged from the center of the second hand and apparently turned to dust (there are some small specs on the dial). This could have been far worse. Not a mark on the crystal or case, and all the hands and functions were still intact. Additionally, it has kept time without issue since the fall. Impressive.

The case uses an anti-shock system called d3o developed to suppress the vibrations caused by ballistic weapons, and apparently, tile floors. d3o is an “intelligent material” that features molecules that will lock together to take the brunt of any shocks. 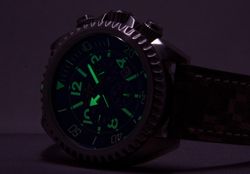 The Rogue Warrior Avenger comes in stainless (silver) or PVD (black) finishes and can be fitted with a bracelet, velcro, rubber, or leather strap with a starting prices of $400 US. That seems expensive given that any number of Citizen and Seiko watches have the same practical features (timekeeping and chronograph). What sets the Avenger apart is its underlying technologies, the krypton gas filled case, bright and enduring luminous paint, and the shock absorbing system that kept it alive despite this reviewer’s cheap spring bars.

The Avenger is very nice to look at, easy to read, tough, and shines as an alternative to more expensive military and paramilitary style watches. We would like to thank Rogue Warrior watches for the review sample.