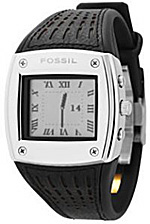 Fossil recently polished up and re-released their Wrist Net watch in an attempt to wrap the MSN Direct service in a slightly more fashionable package. In their own words, the Wrist Net now has a “stylish new look” with its new integrated leather and rubber strap, redesigned buckle, additional watch faces, and slimmer case. I recently reviewed the new Swatch Paparazzi (probably the biggest competitor to the Wrist Net), so I was anxious to see how Fossil’s efforts measured up. And since the Wrist Net is only the second MSN Direct watch to be redesigned since the original lineup (the first being the Suunto n3), I was also interested in seeing if I could discern the direction in which the MSN Direct watches are evolving.

I don’t touch on the MSN Direct service itself in this review, nor do I get into the features of  MSN Direct watches, since I cover both in pretty painstaking detail in my review of the Swatch Paparazzi. And since I don’t have the original Fossil Wrist Net watch, the sole purpose of this review is not to compare the old and the new side-by-side. Rather, I approach the new Wrist Net from a fresh perspective, comparing it to the Swatch Paparazzi where appropriate.

My initial impression of the Wrist Net was not of the watch itself, but of the packaging. It comes in a cool aluminum cylinder that looks like it should be packed with fudge or chocolate chip cookies at Christmas time. The watch is packaged at the top, safely nestled in thick foam padding. Below is your charger and instruction booklets.

I like the look of the Fossil Wrist Net. I liked the pictures I saw of it online, and I like it in person. The new version has a chrome (or chrome-like) case reminiscent of the back of an iPod, and an interesting, well-contoured band. Unfortunately, that’s as far as I got with my initial impressions since the watch was not charged when I got it. One thing I really liked about the Paparazzi was that the battery was fully charged upon removing it from the box. The last thing you want to read in your brand new watch’s Quick Start Guide is “Step 1: Charge your watch for 6-8 hours.”

Somewhat disappointed, I set up the charger and put the watch in place. The Wrist Net charger is something of a C-shaped perch — almost a docking station — and interestingly enough, all you have to do is set the watch down on top of it as opposed to plugging the watch into it. The watch immediately and effortlessly settled into place and began charging. The instruction booklet indicated that I would see the word “charged” on the face of the watch when it was ready, however since the watch had not yet been turned on, it was not likely to display anything no matter how long it sat on the charger. Fortunately, I don’t put too much faith in documentation anymore, so I just decided to let it charge overnight, and put it through its paces in the morning whether it claimed to be charged or not.

The first thing I noticed the next day were the buttons. Maybe I’ve just been spoiled by the unusually high quality and excellent feedback of the Swatch Paparazzi’s buttons, but the buttons on the Fossil Wrist Net feel a little on the cheap side. They are wobbly and soft, and have to be fully depressed in order to count.

When registering the watch with MSN Direct, I was very pleased to confirm (as I had read) that a second watch can indeed be associated with an existing account at no additional charge. If you think about it, the same amount of customized data has to be broadcast whether you have one MSN Direct watch or 100, so there isn’t much to justify additional charges, however Microsoft could have easily done it anyway, so I applaud the fact that they didn’t. I think it’s perfectly reasonable that one might have two MSN Direct watches: the everyday and informal “beater,” and one for slightly more formal occasions.

After activating the watch, I gave it some time to download my channel data and watch faces, and in a few short hours (the initial setup takes a fair amount of time, but subsequent updates and tweaks aren’t so bad), I had a carbon copy of my Swatch Paparazzi, at least from a data perspective. All the same channels and data were available on the Fossil as on the Paparazzi with the exception of watch faces. Each MSN Direct watch comes with a default collection of watch faces, and then you have the ability to pick two additional faces through the online interface. My two additional faces were available on both the Paparazzi and the Wrist Net, but otherwise, the default watch faces are completely different. The Fossil Wrist Net came with either 13 or 26 different watch faces (not including the two downloadable faces), depending on your perspective. There are 13 unique designs, each available in white on back and black on white, for a total of 26 faces. The Paparazzi comes with only five, not including the two downloadable faces.

Getting back to the design of the new Fossil Wrist Net: it looks good — maybe even classy — and does a very good job of hiding it’s bulk. It’s not significantly smaller than the Paparazzi, and in fact is slightly heavier, however the size is more evenly distributed. Ironically, even with a far more prominent antenna embedded in it, the Fossil’s band is less rigid, better contoured, and generally more comfortable than the Paparazzi’s band. The material is a combination of rubber and leather which is both soft against your wrist and nice looking. I’d say Fossil has realized that functionality alone is not going to sell these watches — they have to look and feel good, as well. And size does matter in the world of watches. Although oversized watches are clearly much more acceptable than they used to be, MSN Direct watches have set a new standard, and now companies like Fossil and Suunto (with the new n3i) are  hoping to gain a competitive advantage by slimming them down.

Unfortunately, it didn’t take me long to realize that in many ways, the beauty of the Fossil is skin deep. I mentioned the poor feel of the buttons earlier, but I didn’t mention the mysterious enter button (middle button on the right). For some reason, Fossil designed the button to look like a winder you would find on a mechanical watch. I guess they were just trying to be ironic since a few of their watch faces are vintage analog designs, however I think the button is unnecessarily prominent. When I first saw a picture of the new Wrist Net, I was hoping the button represented some Fossil-specific innovation. Maybe a “jog dial” (a quick and easy way to scroll through options), or a volume control, but apparently it’s just a big button, no better constructed than the other four on the watch. (Did I mention how much I love the buttons on the Paparazzi?)

Speaking of volume, that’s another area in which the Fossil Wrist Net is lacking. The speaker is a little on the weak side, and the tones are muted and muffled. The countdown timer alert sounds four quick, soft tones, then falls silent. The alarm tones are slightly better and do last longer, but are still not as loud as I would like. Sound quality was one of the improvements Suunto made to the n3i, and Fossil might have considered doing the same. They might also consider adding an hourly chime option in the future. Currently, the sound on the Wrist Net is either all on, all off, or alerts only. The Paparazzi, on the other hand, in addition to those three options, also allows you to toggle an hourly chime.

And speaking of alarms, I was disappointed to discover that the alarms on the Fossil Wrist Net are not programmable, meaning you cannot specify a date or a schedule. Both are simply daily alarms. The Paparazzi allows you to specify a pattern like every day, every Tuesday, or a custom date any time in the future.

The Swatch Paparazzi also has a slightly nicer screen. Although they appear to be about the same size, the contrast on the Paparazzi’s screen is higher making it easier to read. The Paparazzi’s backlight is more effective, as well. Although the Fossil’s backlight is certainly adequate, it illuminates the screen unevenly (check out the Fossil Wrist Net photo gallery to see what I mean).

Comparison Chart — The Fossil Wrist Net and the Swatch Paparazzi

1 I really couldn’t tell which watch seemed to do better at picking up a signal. One minute the Paparazzi’s signal strength indicator was higher, the next minute, it was the Fossil’s. All I can definitively say is that both watches’ ability to pick up the MSN Direct signal was perfectly adequate.

3 I  did not explicitly test the durability of either watch, however I’m giving this one to the Paparazzi because the Wrist Net is not water resistant. From the Reference Guide: “Your watch is not meant to be submerged in water. However it will withstand a little rain while being worn.”

What I Don’t Like About the Fossil Wrist Net

The updated Fossil Wrist Net is definitely a step in the right direction, though it’s important to note that the focus was on aesthetics and comfort. I’m not going to make a final determination as to which watch — The Fossil Wrist Net or the Swatch Paparazzi — is the better of the two since I think that’s a completely subjective question and depends entirely on preferences and priorities. I have tried, however, to make enough information available on Watch Report to help you make your own informed decision. I don’t think you’ll be disappointed with either one.