Watches are often known for their connection to culture, sports, world records, or famous people. Rolex is known for reaching the top of Mt. Everest and the bottom of the ocean; Tag Heuer for a rich background in motor sports and sailing; Omega for reaching the moon, and now as watch James Bond prefers. The watch we have in today comes from a California label that has been making watches since 1998, but is seemingly best known for making the watch that is worn by none other than the President of the United States.

We first noticed Jorg Gray when President Obama was seen wearing a simple yet classy chronograph (the watch can be seen in many of his photos), and just had to know where it came from. As it turns out, Jorg Gray makes many attractive and modern designs, including the one we are looking at in this review: the JG1900-14 chronograph.

Here are the facts:

The JG1900-14 is the orange variation of the nicely designed 1900 series. The JG1900 comes in a three-hand or chronograph build with bright orange, blue, yellow, or green motifs which include the hands, all markers, and anodized bezels. I love the the style of the hands and numbers on the JG1900-14; the orange really pops and exhibits a very military feel. The sparse orange-on-black is reminiscent special edition Fortis B-42 series watches. The case has a glossy black PVD style coating and is matched by the signed buckle on the included black leather strap.

The JG1900-14 is powered by a Japanese quartz chronograph movement that keeps predictably accurate time and shows the standard seconds on a sub dial at the six o’clock position. Chronograph seconds are counted with the main seconds hand, minutes at twelve, and hours at the nine o’clock sub dial. The maximum measure is 12 hours. As neither the crown nor the pushers are screw down, the chronograph use could not be easier: the top pusher starts and pauses the measure, and the bottom will reset the count once it has been paused. Time and date setting are standard fare. 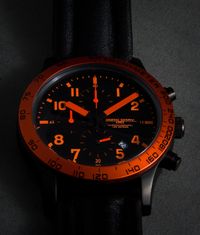 Legibility is the JG1900-14’s strong suit; the bright orange on flat black is easy to read in all but low-light situations. The JG1900-14 has no luminous paint on its hands or markers, so there is no way to view the time in low/no light conditions. This is a large oversight as many have come to expect lume on a watch in this price point. 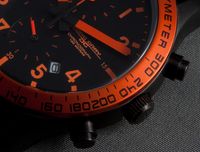 The tachymeter printed on the orange anodized bezel is easy to read, but I do find the bezel to be a little too flashy. An option for orange text on a black bezel would be very nice and just stealthy enough. I also would have liked to see a black date wheel with either white or orange lettering as opposed to the black/white on the current model.

The Jorg Gray JG1900-14 retails from their website for $385 which is on the expensive side for a base quartz chronograph, but not unheard of when compared to other private label designs. The Jorg Gray JG1900-14  is is a sharp looking chronograph with modern military styling, quartz simplicity, and is designed by an American manufacturer. If you are looking for something similar but without the bright bezel, be sure to check out the JG1460 series.

We would like to thank Jorg Gray for providing a review sample.