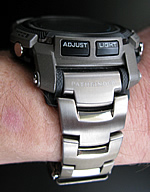 Every new Pathfinder I get tends to become my favorite, and the PAW2000T-7V is no exception. In fact, not only has it become my favorite Pathfinder, but it is also one of my favorite digital watches in general. I’ve typically thought of Pathfinders purely as outdoors watches in the past — watches you only wear while hiking, boating, stargazing, etc. — since all the features they pack have traditionally required large, knobby cases to accommodate sensors and circuit boards. But not so with PAW2000T-7V. Although still obviously a feature-rich digital watch, the PAW2000T-7V is the thinnest, cleanest, and most subtle Pathfinder I’ve ever owned.

The PAW2000T-7V shares a very similar set of features with the PAW1500T-7V we recently reviewed with the following exceptions:

The differences outlined above should help you decide between the PAW1500T and the PAW2000T, but there’s one more thing to take into consideration: size. The PAW2000T is about 2.5 millimeters thinner than the PAW1500T. 2.5 millimeters may not seem like much, but in the context of a watch case, it’s significant. So significant, in fact, that I’ve found the PAW2000T to be the first Pathfinder that doesn’t overwhelm my paltry 6.5″ wrist, and can easily be worn daily as both a fantastic outdoors tool, and an easy-to-read, lightweight, nice-looking, hugely functional timepiece. In other words, the size and form factor of the PAW2000T is a feature in and of itself, and one I’ll be very reluctant to give up in future models.

As always, we thank Casio’s PR agency for the review unit.