Longines has always been known for adding brilliance to its watches through its elegant and classy designs, and so is the case with its more renowned – Longines Flagship Heritage – watch series. Today, the company celebrates 60 successful years with this series, which was started back in 1957.

The watch reflects the 1950s Mad-Men era watches having the classic dial to its front and quite a signature for “men’s dress watch” or “a classic Switch Watch”. On its 60th anniversary, Longines seems quite optimistic to continue to carry the legacy of the Flagship Heritage watches, as a result of which, the company has announced three different versions of it.

These three variants of the Longines Flagship Heritage will be offered in yellow gold (not gold plated), steel and rose gold. 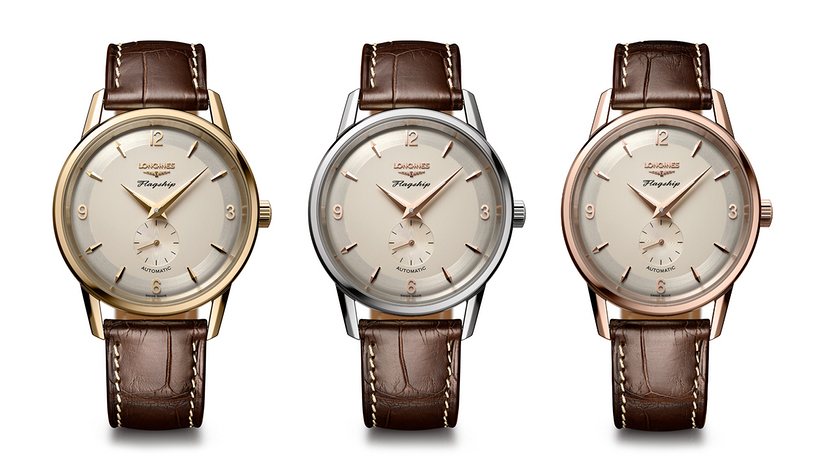 All these three variants will be powered with the caliber L609, which is derived from ETA 2692. Though, we don’t have any images for the back side of the watch, it is expected to feature an engraving of “Caravel” – a representation of the 17th century ship used by the Spanish and Potugese for exploration and trade.

As seen from the above images, we can say that Longines has kept the classic look in-tact which the fame with its Heritage watches. The dial is pretty distinct and clear with adequate visuals. The watch comes in case diameter of 38.5mm and will offer the right fit to the average human hand.

In all we can say that Longines has managed to carry the older legacy quite well ahead implementing the modern machinery while keeping the classic old features in place. We are yet to hear nay kind of details regarding the price of the watches, and even the exact date when about when would these be made available in the market.